An Exploding Star Outshines a Galaxy
Supernova Designation: 2021hiz in IC 3322A
Constellation: Virgo - The Virgin 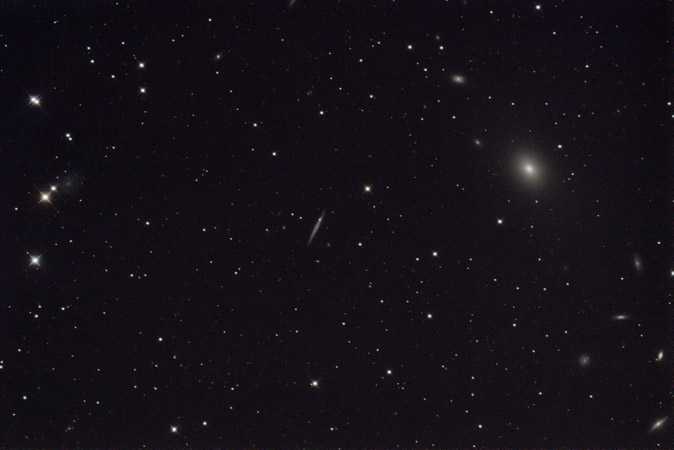 Spring time 2021 was awful for the astrophotographers in eastern Austria. In the few clear nights either the moon brightened the night sky or difficult seeing conditions kept me from obtaining excellent results. That's why in early May I decided not to take a pretty deep sky picture from any prominent galaxy but to document a bright star explosion - a so-called supernova.

An event like this repeatedly happens in all kinds of distant galaxies, but rarely in our own. It was the humble, spindle-shaped galaxy IC3322A at the center of the frame in which a star-like signal was discovered by a professional survey program at the end of March. The galaxy is seen towards the Virgo cluster, but is considerably more distant than this showcase group of galaxies. The light is estimated to take 75 million years to reach planet earth.

The trigger for a particular star explosion like this, which profesional astronomers call a type Ia supernova, is the mass transfer from one member of a binary star system to the other. Once the companion exceeds a critical mass, an incredibly energetic thermonuclear explosion occurs. The fascinating thing about it is the remarkable predictability of the circumstances under which such violent explosions happen and the subsequent consistence of luminosity. It makes type Ia supernovae so called "standard candles" which allow not only to measure distances in the universe in the scale of billions of light years, but also to hypothesize an accelerated expansion of our universe fuelled by the enigmatic "dark energy". The fact that it is a thermonuclear explosion we are seeing here is proven by spectroscopy and the typical light curve. It is driven by the nuclear fission of 56Ni and 56Co with two distincly different half times.

The bright elliptical galaxy to the upper right is NGC 4365.

The effective exposure time was a little bit less than 2 hours. Given the poor seeing quality and the wind that kept my mount busy correcting for the shakes I had to give away one quarter of my raw data. The remaining data still show slightly elongated star definition, but I think the picture is still worth sharing, allowing you to witness the incredible energies being unleashed in our universe...

back to astrophotography page
back to gallery